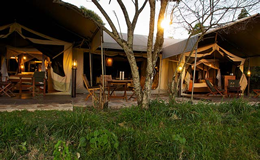 Depart Nairobi in the morning passing through the rich agricultural farmland on the slopes of Mt. Kenya to the mainly dry scrubland and open Savannah plains of Samburu Game Reserve. Here the Ewaso Nyiro River supports a wide variety of games among them elephants buffalo cheetah leopard, lion grevy’s zebra reticulated giraffe, long necked gerenuk
and the Oryx. Set up tents dinner and overnight at the campsite. [Picnic lunch en route].

Morning and afternoon game drives all meals at the campsite.

Leaving Samburu in the early morning, we make a scenic drive to the west across the Lerochi Plateau, [lunch en route] and later descend to the floor of the Great Rift Valley, arriving at Lake Baringo in the afternoon. This is a fresh water lake, which supports a great variety of birds as well as hippos and crocodiles. Indeed the lake is reputed to be the bird-watching center of Kenya.

Early in the morning we head south via Lake Bogoria, which is a shallow soda Lake with a beautiful scenery and also home to a sizable number of flamingos and other species of birds. The highlight however is the boiling hot springs and geyser, which also contributes to the beauty of the lake. After lunch we proceed to Lake. Nakuru in the South – another shallow soda lake that is described as an ornithologist paradise and one of the world’s most magnificent sights.
Here one has an opportunity to see up to two million flamingos besides tens of thousands of others birds if lucky. Lake. Nakuru is a rhino sanctuary and also harbors lions, warthog, waterbuck, buffalo, hippo and many other animals. Dinner and overnight in a guesthouse inside the park

We head further south to Narok, camping in our semi-permanent campsite on the Sekenani gate, which is at the edge of the park. Here we have walk-in tents with beds & mattresses. Showers are available in the camp and meals are served in the dinning mess.

From the base camp we explore the Mara region packed with the elephants, zebras, rhinos and all kinds of game throughout the year with the spectacular wildebeest migration from Serengeti occurring mainly in July and August. All meals at the campsite.

Early breakfast and proceed on a morning game drive. There after proceed to Narok where Masai souvenirs can be brought and then proceed to Nairobi. [Picnic lunch en route]